WOOD TV recently published a story indicating that the Grand Rapids Police Department (GRPD) and the Kent County Sheriff’s Department have had access many surveillance cameras in downtown Grand Rapids since 2009. According to the story, 100 cameras are part of the system.
From the article:

The city center camera system relies on voluntary participation by private businesses. Owners sign an agreement with the Grand Rapids Police Department and Kent County Sheriff’s Department giving them access to the private cameras. There are currently about 100 cameras signed up for the program throughout the downtown Grand Rapids area.

The program is reactive, authorities say: Investigators tap into a nearby camera to review footage after a crime occurs.

Kent County documents show that since the 2009 fiscal year, nearly $630,000 in federal grants has been spent on linking cameras to GRPD.

Wednesday, GRPD would not allow 24 Hour News 8 into dispatch where computers connected to cameras are located. Officials cited a privacy agreement between the business owners and the county to keep the locations of the cameras secret — even though all of them are outside in plain sight.

According to news reports, the City will spend at least $1.5 million dollars on the program. It will begin with the development of a policy for the cameras’ use in early March, followed by testing phase where the GRPD will test multiple cameras from different manufacturers. The full implementation is scheduled to begin in December of 2015.

These cameras will add a new layer of surveillance in Grand Rapids, joining the stationary cameras documented on this site and the license plate scanners used by the police.

Our map of surveillance cameras in downtown Grand Rapids was featured on FOX 17 news a few weeks ago. They highlighted the differences between our 2014 map and a map produced in 2004 by MediaMouse.org.

Some highlights from the story:

Grand Rapids Police Lieutenant Pat Merrill reviewed the maps and could not confirm if all cameras are legitimate, but said the majority of these cameras are private.

“This is something we are doing to each other; it’s not something being done to us by government,” said Merrill. “That’s a big important difference: Big Brother coming and putting a camera up on you, than your neighbor choosing to erect a camera on their own property.”

Although Merrill said detectives will seek out video during investigations, he said the one dome camera at Pekich Park at Cherry Street and South Division is the only camera installed and monitored by GRPD. Over the past few years, Merrill said the amount of crime at Pekich has dwindled.

“We have little interest in monitoring the city of Grand Rapids’ people and their comings and goings via video, no interest in that,” said Merrill. “But we have trouble spots. What we want is the ability to be able to erect something like that, monitor it while the trouble is still active, and then when the trouble goes away, we can pull the video and move on.”

Not surprisingly, Lt. Merrill didn’t mention that there has been a recent push to give police access to the private cameras in real-time, thereby making the issue of ownership a moot point.

The chief says he recognizes the advantages of body cameras, but he has concerns about the public’s privacy and community relations.

“I don’t want it to have a dampening effect on relationships that we’ve worked hard to earn,” he said. “I have concerns more that people who have issues in their neighborhood and may want to share those concerns would be reluctant to do so.”

He thinks if people know they are being recorded, they won’t be willing share information needed to solve a case.

“I’m not comfortable with officers having the ability to activate those cameras in private residences,” he said.

The chief didn’t rule out getting body cams sometime further down the road, but he said he needs more information about when they’ll be activated, how long the video will be stored and who will be able to view the footage before he reconsiders.

A recent article on Mlive.com has more details about the expanded video surveillance program in downtown Grand Rapids. Some important details from the article:

According to various news reports, local and state officials are getting increased access to video surveillance cameras at businesses in downtown Grand Rapids. WOODTV reports that a public-private partnership has been created to allow the city, county, and state access to the cameras via a closed-circuit network. The plan was reportedly in the works for three years but was implemented due to recent shootings in downtown.

The Grand Rapids Police Department will have the capability to view the cameras in real-time.

Additionally, the city is pursuing grants from the Department of Homeland Security to expand the system and purchase additional exquipment.

The map is of course limited to those cameras that could be visibly identified and some may have been missed.

In 2004, the news website Mediamouse.org released a map of surveillance cameras in Grand Rapids: 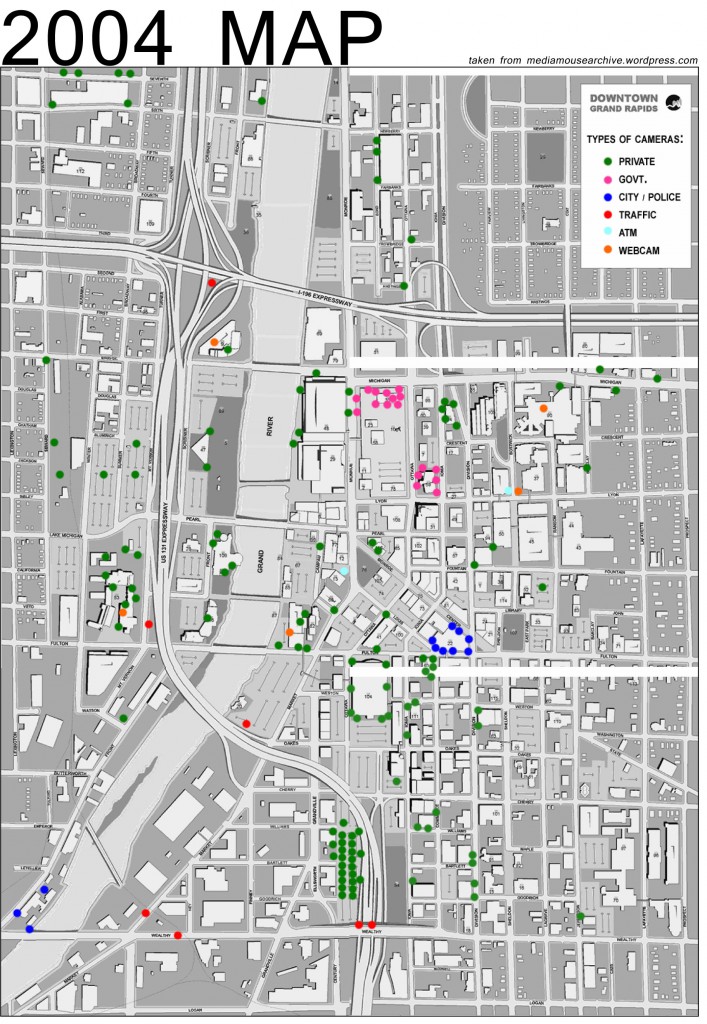 A project documenting surveillance cameras in downtown Grand Rapids, Michigan. For information purposes only... Read more about the map

Maps of Other Cities